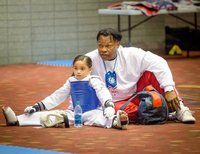 Having a tremendous Love for Life and The Art, Master Greg Always wants his students to be connected to their Inner Spirit.

"Touch people with your Spirit not your feet or Hands".

Let your Love/Kindness and TaeKwonDo Spirit, have a positive effect on everyone you interact with.

This helps you to receive Favor from that Supreme Spirit that Loves/Protects us and wants us to have an Abundant Life.

Remember being a Champion or a Winner is the "Process" that brought you there.

"The Elevator to success is Broken; You have to take The Stairs One Step at a Time"

Met his Former wife at ISU (Linda Donald) married in 1977.

1979-1983 Employed at the Kennedy Space center for NASA as a production Scheduler for the first eight launches of the Space Shuttle (Columbia & Challenger).

1983 - Member of the Orlando Americans of the AFA (American Football Association).

1984-2000 Employed at The Will County Health Department as Investigator,Epidemiologist,Manager,and Project Director.

1984-87 Member of the Blue Island Cardinals of the Metro Football League.

2004 Cast in the Miramax Movie "Derailed " with Jennifer Aniston and Clive Owen.

2004 Elected as Vice President of the Lockport Kiwanis Group.

2005 Cast in The Movie "Stranger Than Fiction" with Will Ferrel, Dustin Hoffman,Queen Latifa Directed by Marc Foster.

2006 - Selected as a National Referee for the Jr Olympic TKD Championships in Atlanta Ga.

2008- Awarded " Master of the Year" from the USA Martial Arts Hall of Fame in a ceremony held in Richmond Indiana on April 12th at the Holiday Inn.

May All of you Live a Blessed and Full life and don't be afraid to reach for your Dreams and enhance the lives of all whom your Spirit touch.

I Want to be remembered as a "Giver", Just as Jesus gave his life for all of us, I am here for

all of you, I give my Physical Life to all of you that choose the path of Righteousness/Kindness/ Love and Integrity.

Don't ever let a monetary situation keep you from your Dreams. We have programs to fit any financial situation, So I Challenge all of you to Reach and Believe!!!!!!!!!!!!!!!!

"May Our Spirit Touch and have a Positive impact on Everyone ".

I Thank all of my loyal Students and Parents and may you live a Long, Loving, Peaceful Life Squeezing it for Every DROP!!! God Bless You and Peace/Love be with you and Yours Always...

During the Summer of 1976 my life forever Changed both Physical and Mental.

I was involved in a single car crash,leaving the campus of Indiana University in Bloomington.

My then Best Friend JAMES(Sanchez)WILLIS sat beside me as we traveled that early morning.

My last words with him early that morning was.

"Talk to me I'm getting sleepy"!

He was killed in the crash as I apparently fell asleep and veered off the road. To this day I

cannot remember what happened as I was told I was the first person out and flagged down someone to help.

Truly an Angel showed up to protect and help me. I remember doing none of this.

All I remember is being in the hospital and seeing James go by me on a stretcher.

(James and other Schoolmates had showed up at my apartment that morning at 6am), (I had just gone to sleep at 5am and was up all that Day and we decided to go to a Dance at I.U. that night.)

My College Coach, Tom Harp,picked me up from the Hospital in Brazil Indiana a few days later and told me James had died.

A part of me also Died with him he was my Best friend, Fraternity Brother,Martial Artist, I cooked him his last meal (A Broiled TBoneSteak). Physically and Mentally, I was never the same. I had injured my neck,chest and knee.

A few weeks after the accident an insurance investigator came by to see me and said he wanted to show me something. He showed me a picture of the car and I will never forget what I saw.

The entire front drivers side roof had been leveled to the height of the hood. He said how could the driver survive such a crash?

Then and he looked at me and couldn't believe I was standing in front of him, and he just walked away, and I never saw him again.

For years I suffered with thoughts of suicide and depression.

My NFL dreams were smashed as I had received numerous letters from NFL teams and Agents.

I chased that dream for many years finally retiring from football after the 1988 season with the AAA Pro football team, The Joliet Chiefs. I played every season between 1971 until 1988 missing only the 1978 season.

A person said to me recently that "wow you've done a lot with your life."

I can never forget my friend JAMES "SANCHEZ" WILLIS

He is with me as I continue to live out our Martial Arts Dream and Finding Spiritual Freedom.
"NEVER GIVE UP" WE ALL HAVE A DIVINE PURPOSE" LIVE IT...